Getting Stable With The Helix Jr. 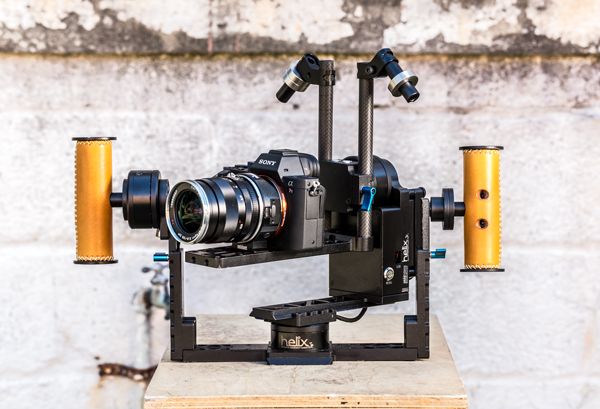 The Helix Jr. by Letus35 Corporation

I am a sucker for presentation, and they didn’t disappoint.  The box is modern and appealing, and the foam inside makes you feel safe.  I know, it’s a box, but stuff like that counts.  It is advertised like most gimbals: “Just take it out of the box and you are ready!”  While this is not far off, it is not entirely accurate.  There are a few items that need to be crossed off before you start shooting.  Once you get a feel for what you have in your hands, the process is very simple.

Once ours was ready to shoot, we did just that!  In all honesty, we haven’t looked back since.  It has been used on almost every single production since its arrival.  It’s now very easy to get the shots we need in a short time.  Like any device though, you need to get to know it well before you can use it like a true professional.

The resulting footage looks superb.  Occasionally there is a little bit of shake when walking faster, but if you apply a stabilizer during post-production it isn’t visible.  We recently used our gimbal with Sony’s A7SII, which has a 5-axis internal stabilizer.  Combined they produced shots that are some of the smoothest I have ever seen.

We continually strive to find better ways to deliver better shots.  Adding movement to scenes adds emotion, drama and a more professional look to our body of work.  We can get movement through dollies, gimbals, jibs, Steadicams, GlideCams or sliders.  To have free range of motion, there are only two real options:  a gimbal or a Steadicam.

Gimbals and Steadicams are not the same, although they use the same physics to balance the camera.  Steadicams make use of an arm that attaches to a vest worn by the operator.  Weights keep it steady while he or she moves the camera as desired.  Gimbals facilitate three gyroscopic motors to compensate for any movement.  The device can be used with either one or two hands.  Software allows the motors to be fine tuned specifically for your camera profile.

Before making the decision to purchase, we researched quite a number of options at NAB 2016 in Las Vegas.  The gimbals by Letus35 Corporation had some clever design features that were lacking in other models we reviewed.  We conferred and agreed it was best for our use, and bought it on the spot.  Flash forward two weeks later, and our Helix Jr. arrived!

Being Stable Makes Us More Professional

Smooth cinematic movement makes your videos look more professional and our clients are taking notice.  It provides one more way to mimic scenes and effects from films, shows or commercials that are popular today.

We are very happy with our Helix Jr gimbal.  It surpasses all of our expectations, and helps us deliver the quality expected by a top production house.  And that is what it’s all about, right?  It sure does feel good to be stable.